Oppo is finally releasing its first-ever smartwatch, which will be named as the Oppo Watch. This watch has caught our interest due to its uncanny resemblance to the Apple watch series. it will be announced at the company’s Oppo Find X2 launch event which will occur on March 6, 2020. The Oppo company posted a tweet on Monday, March 2 which shows a lot more about what to expect from the new Oppo Smartwatch.

It’s quite early to say how the watch really looks and what features it has. But still, we can easily claim that the watch quite resembles the Apple Watch Series. By looking into the image provided by the company, the user can easily receive and make calls with the Oppo smartwatch. It is also possible that the user can send a message if he isn’t able to attend the call.

There’s a lot to say before we really confirm that the Oppo smartwatch is the same as Apple’s watch series. Oppo made an announcement by a tweet from Oppo executive, Brain Shen. In the tweet, the company has revealed the watch’s design which shows a curved screen, unlike the Apple watch series. The watch will also contain a 3D glass, which according to the company’s tweet, will be a game-changer.

Another difference of the Oppo smartwatch from the Apple Watch is the Apple Watch’s Digital Crown, which is technically absent in the Oppo watch. But we can see two physical navigational buttons placed on the bezel on the right side of the watch. The left side of the watch is not seen, so it is unlikely that there is a crown placed just like Apple’s watch series. The watch looks quite attractive due to its two physical buttons and the image below reveals a microphone placed between them. There is also some sort of green led notification light on the lower button of the watch.

Weibo shared a leaked image of Oppo smartwatch on February 25, from which we can analyze its curved screen. The curved screen is one of its kinds, as Apple hasn’t come up with such an idea. By translating the Weibo website using Google Translate, it is noted that the watch works on the “Android system”. Hence, we can conclude that the Oppo smartwatch runs on Google’s Wear OS.

To conclude, we can’t surely say that the Oppo smartwatch is the clone of Apple watch series because there are many features and specs that are yet to unveil. Also, the basic design is the same as the Apple watch series, but the company has tried its best to make it look different because of its curved screen and 3D glass. We can just wait till March 6, when the smartwatch will officially be announced. 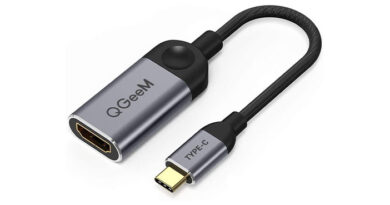 Best USB to HDMI Adapter You Can Buy This Year